I'm going to rework the "Upgrades" part which is a bit goofy. Waiting for Li-An's art. 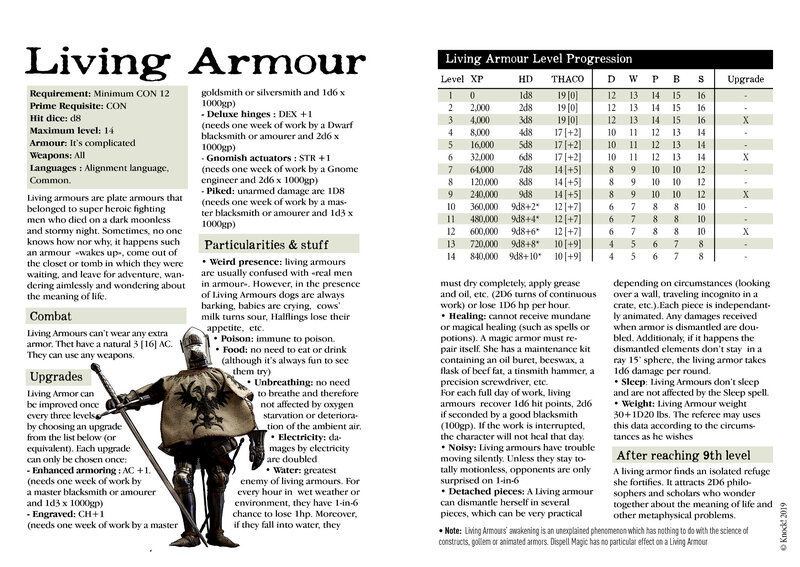 Li-An's vision of the Ne'er-do-well character class. I'm super happy.
Li-An is a French cartoonist (graphic novels).
I'm fan of his work since his Planète Lointaine. You can see his work on his blog : https://www.li-an.fr/blog/propos/  Check his adaptation of Jack Vance's Tschaï. 1 - Throw this silver DAGGER in the air, its blade will always point north once on the ground.

2 - The pommel of this SHORT SWORD represents an owl’s head which hoots gently when the sun goes down. The sword is +1 during night, -1 during daytime.

3 - Stick this LONG SWORD in the ground and the gem encrusted in its pommel shines like a candle.

5 - Three times per day, the magic mouth on this +1  LONG SWORD’s pommel sum up the last eight hours activities of his wielder. Loudly, in trash talk, with harsh comments.

6 - When ordered, this snickering SCIMITAR can do 1D10 more damage to your target and cause you to lose 1D6 points of wisdom for 1D4 days.

7- the gloomy song of this black TWO-HANDED SWORD in combat causes everyone in a 15’ radius but you to lose 1 AC.

8 - On the command word «Biggus!» this little ivory KNIFE becomes a long sword for 1d10 turns 3 times a day.

9 - When you hit one of your fellow adventurers with this shadish radiant KRISS, you gain as many hps than you did damage. Only 1 hp if he’s a hireling, though.

10 - This ever rusted SCRAMASAX loves your blood. Use it to scarify yourself (1-6 hp, your choice) and the blade will become +2 for a number of rounds equal to your loss

11 - The hysterical laugh of the Demon’s head that briefly appears on the pommel of this runes engraved FLAMBERGE when you roll a critical hit, makes everyone including you in a 15’ radius must pass a Save vs Paralysis or stay dazed for 1d6 rounds.

12 - The barbed blade of  this FALCHION turns blue when rain’s coming. You just rolled your character and feel lucky? Roll d66 to define your former occupation.
Then roll d6: 1-2: get the pleasant (a) particularity. 3-4: get the not so pleasant (b) particularity. 5-6: get both.
Before leaving for adventure, you was a...

11 - Grave Robber.
a) 1-in-6 to resist Energy Drain.
b)1-in-6 per night to be haunted (no rest).
12 - Burglar.
a) Pick Lock like a thief, +10% if thief.
b) Thief’s guild is looking for you.
13 - Itinerant dog Shaver.
a) Even bad dogs like you
b) Whatever you do, you have fleas.
14 - Wizard’s Factotum.
a) Save vs Spells +1.
b) Fear of magic (like Barbarian).
15 - Apprentice Sorcerer.
a) Naturally cast one 1st level spell per day (choose randomly every day).
b) 1-in-100 to abruptly cast Fireball when entering any tavern, inn or market place.
16 - Baron’s child.
a) Start with 100 + d100 gp.
b) Stepfather paid Assassins’guild to get you drown.
21 - Peasant’s child.
a) Magic bag, always contains 1 succulent turnip when waking up
b)Father paid Pig Farmers’ guild to bring you back in a jute bag
22 - Highway Bandit.
a) Proficient with spiked club whatever the class, +1 if Fighter.
b) A price on your head.
23 - Blacksmith.
a) Good at  fixing metal stuff
b) face burned by terrible accident, CHA -1.
24 - Married man/woman.
a) She/he gave you a good luck charm: no fumble ever
b) Father in law paid baillif’s men to bring you back in a jail wagon.
25 - Bard’s handyman.
a) Good at singing.
b) Sing only bawdy songs, always at the wrong time (at referee’s discretion).
26 - Troubadour.
a) Good funambulist, mime or juggler
b) Gone with the group’s receipts, they’re after you.
31 - Executioner.
a) Proficient with axe whatever the class, +1 if Fighter.
b)1-in-6 per night to be haunted
(no rest).
32 - Tax Collector.
a) Good at detecting shady stuff
b) Someone you ruined prepares merciless revenge.
33 - Miner.
a) Always find north in underground environment
b) Recurring claustrophobia. 1-in-6 every six hours in underground: roll 2d keep the worst for any rolls during next 6 hours.
34 - Exotic Dancer.
a) Good at seducing people.
b) Decrepit wizard enamored with you sent his minions to bring you back in a golden cage.
35 - Palace Guard member.
a) Proficient with Halberd whatever the class, +1 if Fighter.
b) Got jiggy with Prince/Princess: a price on your head.
36 - Exorcist.
a) You can turn undead like a level 1 Cleric, like level +1 if Cleric.
b) Energy Drain kills you on 2-in-6.
41 - Beggar.
a) Good at catching rumors. Roll twice.
b) Malnutrition got you. HD is -1.
42 - Shoemaker.
a) You have nice shoes.
b) You’re leather allergic.
43 - Changeling.
a) 4 dragonfly wings in your back under a large silk coat. Like Feather Fall.
b) You’re a jinx: on 1-in-6 twice a day, something happens at referee’s discretion.
44 - Child abucted by Faerie.
a) Can move your nose bizarrely and cast any one 1st level illusionist spell once a day.
b) The King of Feys sent his 3 best goblin knights to bring you back in a portable hole.
45 - Slave.
a) FOR +1
b) Your former master is after you.
46 - Bonesetter.
a) Can heal 1d3 hp per 6 turns of continuous work.
b) Magical healing can’t work on you.
51 - Zealot of the Serpent Cult.
a) Save vs poison +1.
b) Infamous cult’s tatoo on the forehead, CHA -1 and bad reputation.
52 - Fanatic Acolyte of the Righteous Lawbringer Order.
a) +1 AC vs chaotic opponent
b) 1-in-12 becoming bersek when encountering chaotic being.
53. Quarryman.
a) FOR +1.
b) CON -1.
54 -  Poacher.
a) You’re good at survival skills.
b) A bear ate your left arm.
55. Landsknecht.
a) Roll 2d keep the best when rolling damage with Flamberge (proficient whatever the class).
b) Bad wound and bad reputation, DEX -1 CHA -1.
56 - Ghost Hunter.
a) Roll 2d and keep the best when rolling damage vs incorporeal undead.
b) Always get the shakes, WIS -1 and embarassing for social life.
61 - Fisherman.
a) Tiny magical hook: always catching enough to feed 1d6 people after 1 hour of fishing .
b) Cursed by angry river spirit: whatever you do, you smell like dead fish.
62 - Butcher
a) Your knife makes damage like sword.
b) Fanatical vegan.
63 - Rat-catcher.
a) Resist disease in 3-in-6.
b) The Rat king sent three vicious giant rats to eat your heart, alive.
64 - Pilgrim.
a) Inn prices always halved for you.
b) WIS -1 until you pray in 77 different temples.
65 - Gravedigger.
a)Undeads don’t attack you if there is at least one other convenient unattacked target.
b)You never laugh.
66 - Dead.
a) All mundane damages you receive are halved (rounded down).
b) All characteristics -1 If I had to choose one and only one fantasy/sci-fi author, that would be Jack Vance. I've always been a fan of his Dying Earth series and actually of all his novels. I always read again all his books, on a loop, with no perticular order, since 30 years or so.
They're more than fantasy or Sci-Fi novels. His books are traveler's tales, weird encounters tales and talks about the human condition, with humour and smartness.

The D&D original Thief class surely borrows a lot from Cugel. I tried something else. Good for nothing, ready for everything: the Ne'er-do-well. Draft :

Ne’er-do-well are lazy vagabonds, nonchalant outcasts, clever profiteers or malicious punks. They learned to survive as well as they could, while developping many talents without ever improving any one of them, always having better or more pleasant things to do.
Perfectly mastering the art of escapism, like avoiding unpleasant, boring, arduous, or banal aspects of daily life, and frantically dreaming about a better destiny, they often join a band of promising adventurers. Their motto :
«Good for nothing, ready for everything!»

Combat
Ne’er-do-well firmly believe in freedom of movement,  flexibility and blitz reaction. Leather is the heaviest armor they can tolerate. They can use any weapons.

Opportunist
When attacking an unaware opponent from behind Ne’er-do-well gain a +2 bonus to hit and make maximum damage.

Obtuse and stubborn
Ne’er-do-well gain a +2 bonus to their save against mind affecting spells, like charms and illusions.

Penny piching
When Ne’er-do-well bargain the referee may allow a CH ability check and adapt the result to the circumstances. Success are generally greatly benefitial, failure often have undesirable and unpleasant consequences.

Sense of danger
Ne’er-do-well have a 1-in-6 chance to sense a close danger, like a trap or an ambush. The referee rolls for the character.

Wanabe wizard
Ne’er-do-well are clever and passionately observant, especially when it comes to magic and magicians. Starting at 3rd level, they can cast or memorize arcane spells from scrolls.There is a 20% chance per level of spell the spell does not function as expected and creates a disastrous and flabbergasting effect. Ne’er do well can memorize one spell + one spell per Intelligence modifer bonus.

After reaching 9th level
Ne’er-do-well may acquire a stronghold, generally a rich and outlandish manor and live the good life,  attracting 2D6 Ne’er do well and profiteers he will employ as lackeys, bodyguards, masseurs, entertainers, exotic dancers etc. who will also mostly try to rob him regularly. Helmets are cool. Helmets are fun. Helmets are a good way to distinguish your warrior from the crowd .
Helmets are the Last Chance Save. And Fighters without helmets look like shit.

My rule for helmets: once per encounter when opponent hits character, the player may declare before rolling damage «I trust my helmet!» and roll 1d6. On 4-6 damages are cancelled, on 1-3 they are doubled. +1 for magic helmet.